Work has begun on an ambitious project to install pavement fountains in Withernsea. The innovative scheme – believed to be the first of its kind on the East Yorkshire coast – will see dancing fountains on Withernsea’s seafront.

The first phase to install a plant room for the attraction in the Memorial car park began on Monday, January 8. The project by work by Jackson Civil Engineering is expected to be completed in six weeks, weather permitting. A spokesperson from Withernsea Town Council confirmed the car park will still be accessible during this first phase of the works.

The fountains will cost around £311,000 and are a key part of the Withernsea Seafront Improvement Plan. They are being funded by Big Local, Dong Energy and East Riding of Yorkshire Council.

Withernsea’s Big Local Project put £191,000 towards the scheme with Dong Energy contributing £80,000 and £40,000 from East Riding of Yorkshire Council.

Work was initially due to begin in March 2017 so that the feature would be ready in July. But following concerns raised at a town council meeting over the timing of the work, the council formally requested the start be delayed until after the summer.

The project was first introduced in 2015 when the cost was estimated at £221,000, but technical issues increased the cost. It was first mooted by the Withernsea and South East Holderness Regeneration Partnership as part of its seafront plan.

Planning included developing a design that avoided the mains sewer that runs along the promenade and finding a location for the plant room which is now being specially built in the car park near the Meridian Centre.

The fountains are expected to attract more tourists and will see the transformation of the promenade with 14 jets arranged in a zigzag pattern around the town’s beacon just south of Pier Towers.

Special lighting will illuminate the cascading water jets which can be raised and lowered and will run both day and night.

New raised seating funded to the tune of £12,000 by Tesco Bags of Help will also help to create a focal point on the central promenade for the fountains, which alongside Pier Towers will be one of the resort’s key features to create a public space for visitors.

Peter Crawley, Big Local chairman, said: “I am pleased that the work has started on time, it looks as though they are getting on well. I’m looking forward to seeing it completed; it is due to be finished in mid-February. It’s been a long, long struggle from the general public saying that they want this type of project in the town to actually getting it.

But with a big project like this there are always going to be hurdles to overcome and some have been difficult. This is the first major project of Big Local’s two-year plan and even though we are now onto our three-year plan, this is still there and is one of our most visible projects to attract people to the town.” 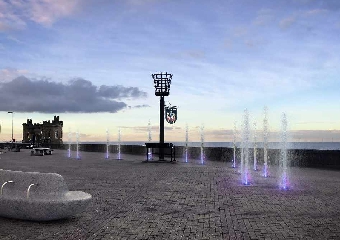 Posted in:  News
About me automatic widget